Commemoration of the UN Day for the Eradication of Poverty

Thank you to Imelda O’Riordan for writing about the recent visit by members of our art exhibition group to Dublin events to mark UN Day for the Eradication of Poverty: 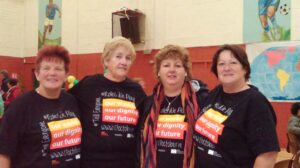 “Pauline Dore, Imelda O’Riordan, Breda Heelan and Mary Raleigh travelled to Dublin on Saturday the 17th October to attend the Commemoration of the UN Day for the Eradication of Poverty. Groups had come together from many parts of Ireland to join groups from Dublin in a mark of friendship and solidarity. The groups gathered around the commemorative stone on Custom House Quay near the Famine Memorial in Dublin.
The day started with songs from the high hopes choir and was followed by an inspiring talk from the Lord Mayor of Dublin she outlined the 17 Global Goals hoped to achieve major transformations in the next 15 years.
The proclamation of Joseph Wresinski’s message was read by three young children in three languages Irish French and English.
The most touching part of the day was the testimonies from different groups, many people were moved to tears of their sad stories of poverty and homelessness and how they had fought against inequalities. Testimonies from migrants and their experiences of Direct Prevision and the Traveller’s community also were very informative.
We were treated to more songs from the Neighbourhood Youth Project and the SAOL Project. Poems by Rita Higgins were enjoyed by all attending. The morning was concluded with placards passed around and placed on the commemorative stone.
We were all invited to lunch at the nearby Sheriff Youth Club Hall here some of the delegations from the different DSP funded projects in Ireland were invited to speak on behalf of their groups Pauline Dore spoke on behalf of Hospital Recourse Centre.  Pauline spoke about the Exhibition of Art work and explained the messages behind the art work of the Lives project. Pauline spoke of her own feelings of both global and lrish poverty.
A great informative day was enjoyed by all and we would like to thank Hospital Resource Centre for giving us the opportunity to attend.”
Imelda O’Riordan

This website uses cookies to improve your experience while you navigate through the website. Out of these, the cookies that are categorized as necessary are stored on your browser as they are essential for the working of basic functionalities of the website. We also use third-party cookies that help us analyze and understand how you use this website. These cookies will be stored in your browser only with your consent. You also have the option to opt-out of these cookies. But opting out of some of these cookies may affect your browsing experience.
Necessary Always Enabled

Any cookies that may not be particularly necessary for the website to function and is used specifically to collect user personal data via analytics, ads, other embedded contents are termed as non-necessary cookies. It is mandatory to procure user consent prior to running these cookies on your website.